Gabby: A Story of Courage and Hope 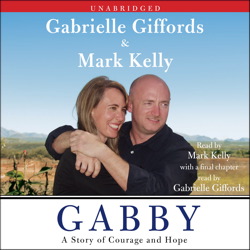 The shooting of Gabby Giffords and nineteen others, six of whom were killed, took place in Tuscon, Arizona on January 8, 2011, in the early days of what has become a tragic and devastating escalation of mass shootings across the United States.

Gabby had just begun her third term serving in the Arizona House of Representatives and was meeting with her constituents when she was shot in the head. She was evacuated to the hospital in critical condition. Her husband, Mark Kelly, a retired U.S. Navy captain and an astronaut for NASA at the time, flew directly from Houston and dedicated himself to Gabby’s bedside as she fought to survive and recover.

This book chronicles the lives of these two extraordinary American figures—the careers that led them to one another; their passion for public service; and the grueling medical challenges and hard-fought journey to Gabby’s significant recovery. In 2013, Gabby and Mark launched Americans for Responsible Solutions, a non-profit and Super-Pac which would later become Giffords, an American advocacy and research organization focused on promoting gun control. That same year, Gabby received the John F. Kennedy Profile in Courage Award in recognition of the political, personal, and physical courage she demonstrated in her public advocacy for policy reforms aimed at reducing gun violence.

Gabby: A Story of Courage and Hope