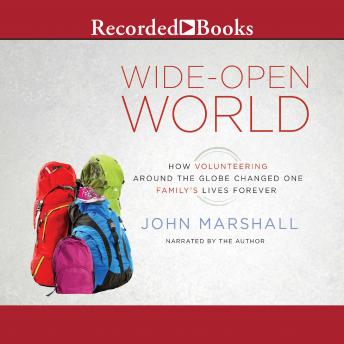 His twenty-year marriage was floundering. His two teenage kids were lost in cyberspace most of the time. He felt disconnected from his work, his family, his life. Which is when he had an idea: Let's volunteer our way around the world. John Marshall had read about the growth of voluntourism, and frankly, it was the only kind of extended trip he could afford. He'd heard that some peoples' lives were changed by a week of overseas service-what might half a year accomplish for his family? His wife Traca was all in favor of it; his kids, especially his 14-year-old daughter, were strongly opposed. WIDE-OPEN WORLD is the totally engaging, bluntly honest story of the Marshall family's life-changing adventure: six months of world travel, volunteering their way from Costa Rica to New Zealand to East Asia, how it went and what it led to. As Marshall discovered, he and his family did not change the world; the world changed them.