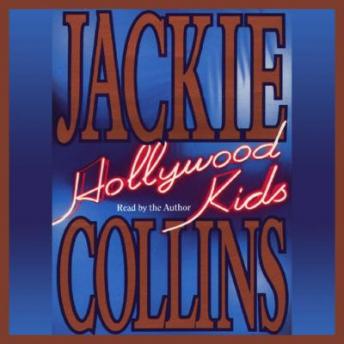 Wherever there's money and glamour, trouble can't be too far behind—in Hollywood Kids Jackie Collins takes her readers back to the Hollywood Hills for another absorbing page-turner of sex, ambition, and deadly revenge.

At the novel's core is the Hollywood Five, a clique of jaded twenty-somethings whose parents (all major players) thought that child-rearing ended with naming their offspring after themselves. Jordanna Levitt is the wildly beautiful daughter of a powerful producer and legendary movie star mother. Even though she flaunts a coltish bad-girl image, Jordanna yearns for more than lounging behind the velvet ropes in chi-chi clubs. Jordanna's best friend, Cheryl Landers, is a sassy, leggy redhead, who is equally idle. Cheryl fills her days doing lunch and buying up Rodeo Drive until a Hollywood Madam asks her to mind shop while she's out of town. Pandering to the rich and famous goes so smoothly that she can't resist turning a trick herself. Grant Lennon, Jr., the son of the last generation's wildly handsome icon, is a junior agent at International Artists Agents. Not satisfied with the number of starlets he can get on his own, he agrees to 'test-run' women for Cheryl's fledgling entrepreneurial venture for a fee. Marjory Sanderson is a dreamy-eyed head case. Barely recovered from anorexia, she invents one phobia fast on the heels of the last one in order to keep her television magnate father's attention. Shep Worth—the effeminately beautiful son of a sex-symbol mother who won't publicly acknowledge her age—is a man who won't publicly acknowledge his alternative sexual preference.

These Hollywood kids have been given everything money can buy except a raison d'être. Though their attitudes are large enough to fill any room, these offspring of privilege are all desperately trying to figure out what to do with themselves. However, life among the rich means life among the damned. A recently released psycho-killer, erotically propelled by blood-lust, is determined to wreak havoc and revenge on the kids' lives.

Jackie Collins is back doing what she does best, chronicling the lives of the rich, famous and infamous with devastating accuracy, and Hollywood Kids is Jackie Collins at her best.

This title is due for release on October 1, 1994
We'll send you an email as soon as it is available!