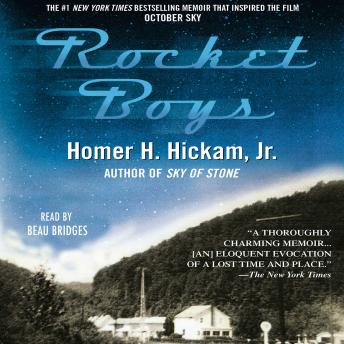 Until I began to build and launch rockets, I didn't know my hometown was at war with itself over its children, and that my parents were locked in a kind of bloodless combat over how my brother and I would live our lives....And I didn't know that the enthalpy decrease in a converging passage could be transformed into jet kinetic energy if a divergent passage was added. The other boys discovered their own truths when we built our rockets, but those were mine.
So begins Homer 'Sonny' Hickam, Jr.'s extraordinary memoir of life in Coalwood, West Virginia -- a hardscrabble little company town where the only things that mattered were coal mining and high-school football. The son of the mine's superintendent and a mother determined to push her son to a better life, Sonny fell in with a group of misfits for whom the future looked uncertain. But in 1957, after watching the Soviet Satellite Sputnik streak across the sky, Sonny and his teenage friends took their future into their own hands, changing their lives and their town forever.
Looking back after a distinguished NASA career that fulfilled his boyhood ambition, Hickam shares the story of his youth, taking listeners into the life of the little mining town and the boys who came to embody both its tensions and its dreams. With the help -- and sometimes hindrance -- of the people of Coalwood, the Rocket Boys learn not only how to turn mine scraps into rockets that soar miles into the heavens, but how to find hope in a town that progress is passing by.
In this uniquely American memoir, Homer Hickam beautifully captures a moment when a dying town, a divided family, and a band of teenage dreamers dared to set their sights on the stars -- and saw a future that the nation was just beginning to imagine.

This title is due for release on November 1, 1998
We'll send you an email as soon as it is available!