Under the Color of Law 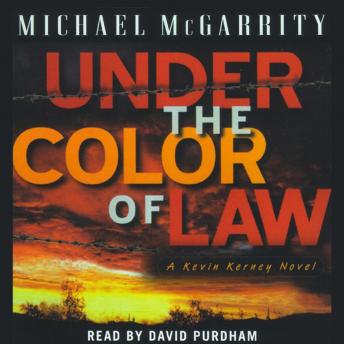 He's returned to Santa Fe, newly installed as police chief, when a U.S. ambassador's estranged wife is found murdered in her multimillion-dollar home. Before he can mount a proper investigation, an FBI anti-terrorism team arrives, takes control of the inquiry, and forces Kerney to watch from the sidelines as the crime scene is sanitized, potential witnesses disappear, and the case is cleared with trumped-up evidence.
Warned off, put under surveillance, and threatened with reprisals under the rubric of national security, Kerney balks at accepting the whitewash and begins a soft probe that points to a covert intelligence cover-up with tendrils stretching from every known government spy shop and running deep into the South American jungles.
Convinced that unscrupulous government agents are acting outside the law, Kerney begins his own clandestine hunt for a hard target that will lead him to the truth about the Terrell homicide, knowing full well he might not survive the chase.
Under the Color of Law delivers another one-two, know-out punch that firmly establishes Michael McGarrity's place in contemporary investigative fiction.

Under the Color of Law

This title is due for release on July 1, 2001
We'll send you an email as soon as it is available!