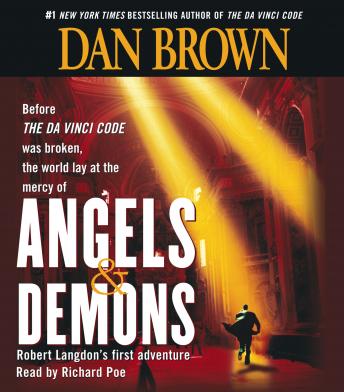 An ancient secret brotherhood. A devastating new weapon of destruction. An unthinkable target.

When world-renowned Harvard symbologist Robert Langdon is summoned to a Swiss research facility to analyze a mysterious symbol, he discovers evidence of the unimaginable: the resurgence of an ancient and powerful secret brotherhood known as the Illuminati—which has its sights on its longtime enemy: the Catholic Church.

Desperate to save the Vatican, Langdon joins forces in Rome with the beautiful and mysterious scientist Vittoria Vetra. Together, they embark on a frantic hunt through sealed crypts, dangerous catacombs, deserted cathedrals, and the most secretive vault on earth—the long-forgotten Illuminati lair which houses the only hope for the salvation of the Catholic Church.

“A breathless, real-time adventure” (San Francisco Chronicle), Angels & Demons is an unputdownable and whip-smart thriller that careens from enlightening epiphanies to dark truths as the battle between science and religion turns to war.

This title is due for release on September 1, 2003
We'll send you an email as soon as it is available!