When Pride Still Mattered: A Life of Vince Lombardi 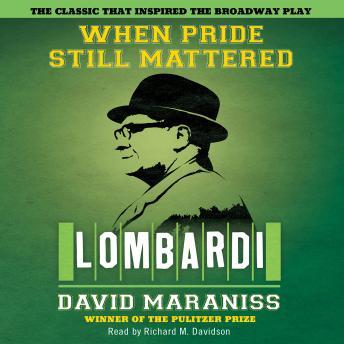 In this groundbreaking biography, David Maraniss captures all of football great Vince Lombardi: the myth, the man, his game, and his God.

More than any other sports figure, Vince Lombardi transformed football into a metaphor of the American experience. The son of an Italian immigrant butcher, Lombardi toiled for twenty frustrating years as a high school coach and then as an assistant at Fordham, West Point, and the New York Giants before his big break came at age forty-six with the chance to coach a struggling team in snowbound Wisconsin. His leadership of the Green Bay Packers to five world championships in nine seasons is the most storied period in NFL history. Lombardi became a living legend, a symbol to many of leadership, discipline, perseverance, and teamwork, and to others of an obsession with winning. In When Pride Still Mattered, Pulitzer Prize-winning author David Maraniss captures the myth and the man, football, God, and country in a thrilling biography destined to become an American classic.

When Pride Still Mattered: A Life of Vince Lombardi

This title is due for release on October 1, 1999
We'll send you an email as soon as it is available!