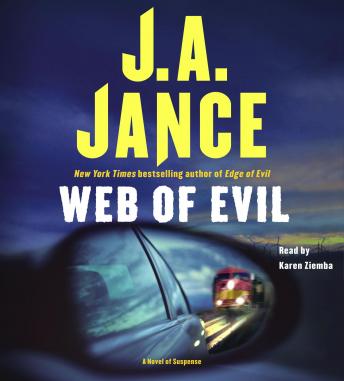 In the second thrilling adventure of the New York Times bestselling Ali Reynolds series, Ali’s soon-to-be-ex-husband turns up dead under mysterious circumstances, and Ali soon finds herself the prime suspect at the center of a terrifying web of evil.

The highway from Los Angeles to the Palm Springs desert is parched, unforgiving, and deadly. In the suffocating stillness of a car trunk, a man—his mouth and hands bound with tape—waits to learn his fate. Fortunately for him, he’ll never know. What possible enemy could be bitter enough to commit such a heinous crime? And when will the monster make another move?

Ali Reynolds is traveling that same blistering, lonesome highway, looking forward to putting her past behind her. She’d left Los Angeles for the home comforts of Sedona, Arizona. But her cheating husband is in a hurry for a divorce; his very young and very pregnant fiancée has a wedding planned for the next day. And the television network that wrongfully dismissed Ali for the sole sin of being over forty will face her in court as well. So, Ali must return to the scene of those crimes. As she passes the site of a horrifying accident, she’s thankful it’s no longer her job to report the news. Until she finds out the news is her own: the victim is Ali’s husband, and soon she’ll find herself the prime suspect at the center of a terrifying web of evil.