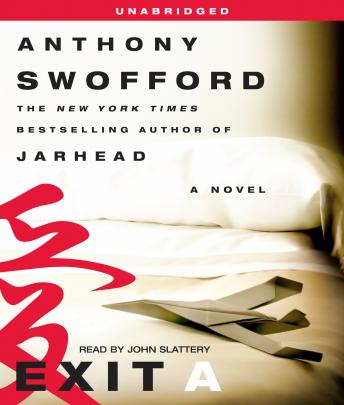 Anthony Swofford follows his international best-seller Jarhead with an unforgettable first novel -- a powerful story about a youth spent on a U.S. air base in Japan and the gritty neon streets just outside it, where the Japanese underworld lurks and a rebellious young girl finds herself in great danger........

Seventeen-year-old Severin Boxx, an earnest, muscular high-school-football star, lives on an American air force base on the outskirts of Tokyo. Severin is mad for Virginia Kindwall, the base general's daughter, who is a hafu -- half American and half Japanese. Beautiful, smart, and utterly defiant of her father, Virginia has become a petty criminal in the Japanese underground.

Severin is soon caught up in Virginia's world, and together they drift through the mad neon landscape outside the walls of the base, near the busy Haijima rail station, a place of movement, anonymity, and sudden disappearance. Exit A is one of its many shadowy doorways. Severin and Virginia fall into trouble way over their heads and are soon subjected to the enormous, unforgiving tensions between America and Japan. Years later, Severin and Virginia remain lost to each other, until an emotionally frayed, thirty- something Severin embarks on a quest to find Virginia -- and the part of himself taken from him when his boyhood abruptly ended.