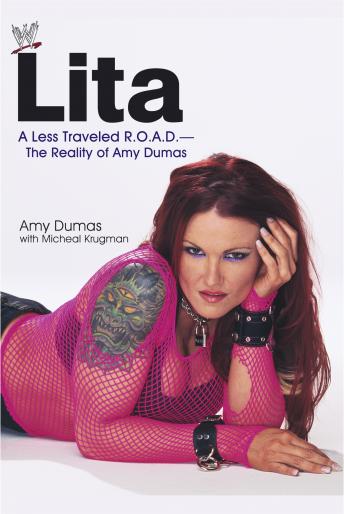 Lita™ -- see her just once in the ring and you can never forget it. The breathtaking off-the-top-rope fearlessness that she shows keeps you on the edge of your seat. You simply can't believe she's going to be able to pull off the move, and then Lita™ takes it to the next level. That's her reality, that's why she is a WWE™ Superstar.
Taking unexpected risks, daring to do what no one has done before, that's the reality of Amy Dumas, the remarkable woman behind Lita™. Amy found people who saw her determination and her heart, and agreed to train her. Among them were two local North Carolina stars who had just signed with WWE™ -- Matt and Jeff Hardy. Amy formed an instant bond with the dynamic Hardy Boyz™, whose spectacular style and high-flying bravado inspired her own bold in-ring style.
It wasn't long before Amy -- now Lita™ -- joined Matt and Jeff in WWE™, and the three friends become international sensations as Team Extreme™. Lita™ proved a true pioneer in women's wrestling, daring to get in the ring with the boys -- including Triple H™, Stone Cold Steve Austin™ and The Rock® -- and never backing down. It took a broken neck suffered on the set of a television series to stop her...but only temporarily. Lita™: A Less Traveled R.O.A.D-The Reality of Amy Dumas is the stirring tale of one young woman's amazing journey to the top of the wild, wonderful world of WWE™.

This title is due for release on September 1, 2003
We'll send you an email as soon as it is available!