The Great Depression Ahead: How to Prosper in the Crash That Follows the Greatest Boom in History 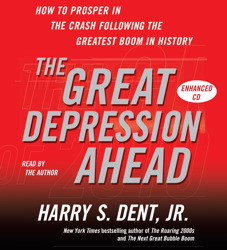 Harry S. Dent predicted our current economic crisis, and he foresees still more to come. He predicts that we are headed further towards a major depression reminiscent of Japan’s major recession more than a decade ago, from which their real estate market has yet to recover. With the current state of the stock market causing investors around the world to be nervous, and searching for answers, The Great Depression Ahead offers important advice to help readers not just survive, but prosper in the face of the crash.

Dent has developed theories that have accurately predicted changes in the market. He is a frequent target of economists, yet with few exceptions, Dent has always been right about the market. With fully updated predictions and reflections on all that has happened since the hardcover came out in December of 2008, this is a book on the economic crisis that we can’t afford not to read.

Great Depression Ahead: How to Prosper in the Crash That Follows the Greatest Boom in History

This title is due for release on January 6, 2009
We'll send you an email as soon as it is available!