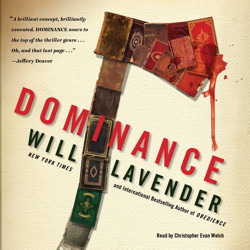 Written By: Will Lavender

A fast-paced literary puzzler, Dominance is “an academic mystery that gleefully illustrates the dangers of losing yourself in a book” (The New York Times Book Review).

Fifteen years ago, Alex Shipley was part of a special night class taught by Richard Aldiss, a re-nowned literature professor— and convicted murderer. Lecturing the group of nine hand-picked students from a video feed in his prison cell, the professor spoke only of one novel by a famously reclusive author, and he challenged the class to solve the mystery of that writer’s identity once and for all.

Today, Alex is a Harvard professor who made her name as a member of that class, and as the woman who helped set Richard Aldiss free. But when one of her fellow alums is murdered, can she use what she learned from Aldiss to stop a killer—before each of the night class students is picked off, one by one?

This title is due for release on July 5, 2011
We'll send you an email as soon as it is available!