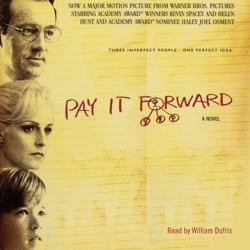 An immediate bestseller when first published, Pay It Forward captured hearts all over the world, became a wildly popular film, and spawned a generation of increased altruism. This anniversary edition includes a new introduction by the author. It takes an inspiring and moving tale of a young boy who believed in the power of kindness and brings it to a new generation of readers.

Twelve-year-old Trevor McKinney accepts his social studies teacher’s challenge: come up with a plan to change the world. His idea is simple: Do a good deed for three people and ask them to “pay it forward” to three others in need. He envisions a vast movement of kindness and goodwill spreading beyond his small California town and across the world. The project, however, appears to falter. Jerry, a bum who receives some allowance money from Trevor, returns to a life of dissolution. Trevor wants his pretty, hardworking mother—a woman who raised him lovingly despite struggles with alcoholism—to marry his teacher, Reuben St. Clair. Reuben is a scarred, bitter, untrusting man with a disfiguring injury from Vietnam. He seems to come alive only when in front of his class. For a time that matchmaking brings nothing but problems. Ultimately, though, unusual things start to happen. Crime rates dip across the nation, and nobody seems to know why. Then a journalist tracks down the source: an epidemic of random acts of kindness.

Anyone who has ever despaired of one person’s ability to effect change will rejoice in Trevor’s courage and determination to see the good in everyone.

This title is due for release on January 3, 2012
We'll send you an email as soon as it is available!