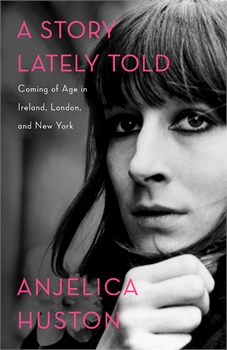 A Story Lately Told: Coming of Age in Ireland, London, and New York

In her first, dazzling memoir, Anjelica Huston shares the story of her deeply unconventional early life—her enchanted childhood in Ireland, living with her glamorous and artistic mother, educated by tutors and nuns, intrepid on a horse. Huston was raised on an Irish estate to which—between movies—her father, director John Huston, brought his array of extraordinary friends, from Carson McCullers and John Steinbeck to Peter O’Toole and Marlon Brando.

In London, where she lived with her mother and brother in the early sixties when her parents separated, Huston encountered the Rolling Stones and Fleetwood Mac. She understudied Marianne Faithfull in Hamlet. Seventeen, striking, precocious, but still young and vulnerable, she was devastated when her mother died in a car crash. Months later she moved to New York, fell in love with the much older, brilliant but disturbed photographer, Bob Richardson, and became a model. Living in the Chelsea Hotel, working with Richard Avedon and other photographers, she navigated a volatile relationship and the dynamic cultural epicenter of New York in the seventies.

A Story Lately Told is an “evocative” (The New York Times), “magically beautiful” (The Boston Globe) memoir. Huston’s second memoir, Watch Me, will be published in November 2014.

This title is due for release on November 19, 2013
We'll send you an email as soon as it is available!