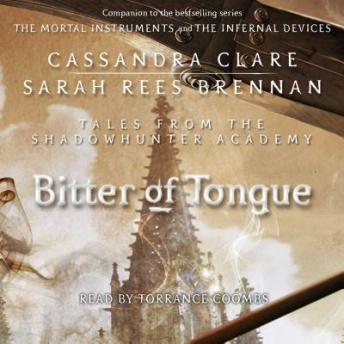 When Simon is kidnapped by the fey, he’s amazed to find a friend in former Shadowhunter Mark Blackthorn. One of ten adventures in Tales from the Shadowhunter Academy.

After Simon is kidnapped by faeries (why is he always kidnapped?), he uncovers rumors of a secret weapon Sebastian left behind for the faerie queen. He must escape the Fey, relying on his only ally, former Shadowhunter and Dark Artifices character Mark Blackthorn.

This standalone e-only short story follows the adventures of Simon Lewis, star of the #1 New York Times bestselling series, The Mortal Instruments, as he trains to become a Shadowhunter. Tales from the Shadowhunter Academy features characters from Cassandra Clare’s Mortal Instruments, the Infernal Devices, and the upcoming Dark Artifices and Last Hours series. Bitter of Tongue is written by Cassandra Clare and Sarah Rees Brennan.

Read more of Cassandra Clare’s Shadowhunter Chronicles in The Infernal Devices, The Mortal Instruments, and The Bane Chronicles.

This title is due for release on August 25, 2015
We'll send you an email as soon as it is available!