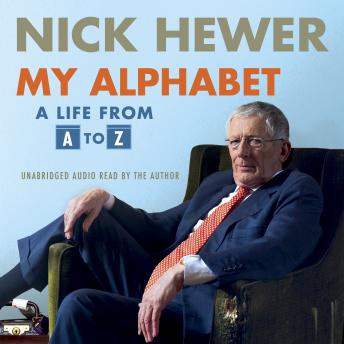 My Alphabet: A Life from A to Z

'I always knew he was quite creative, but I had no idea he was so reckless' Lord Sugar
'The thinking woman's Bakewell tart ... Witty, interesting and underpinned by a sharp intellect' Jo Brand
'This book is a total delight - as wise and witty and surprising as the man himself' Gyles Brandreth

When Nick Hewer first appeared on our TV screens in The Apprentice in 2005, he had thought he was heading towards a quiet retirement after a long and successful career in PR and marketing. Little did he realise that appearing on the show with Lord Sugar and Margaret Mountford would mean that his life was about to be transformed. Quickly, he became a regular presence in our homes, renowned for his wry sense of humour and his astute insights.

But the story of how the current host of Countdown came to this point has remained largely unknown – until now. In My Alphabet, Nick Hewer takes us through an A to Z of some of the most remarkable and entertaining events his life, covering everything from his Boyhood in Swindon, when he took his Dinky toys on a most unexpected journey, to Regrets, and an episode that ended in a kidnapping. With chapters on subjects from Tottenham Hotspur to one on Underwear, there is sure to be something for all tastes in this book.

My Alphabet builds up into a brilliant and fascinating self-portrait, taking the listener on a remarkable journey that will inform, entertain and move you. We get to see behind the scenes on The Apprentice and Countdown, and much else besides. Self-deprecating and witty, Nick Hewer has written and narrated a brilliant book his many fans are sure to treasure.

My Alphabet: A Life from A to Z

This title is due for release on September 6, 2018
We'll send you an email as soon as it is available!