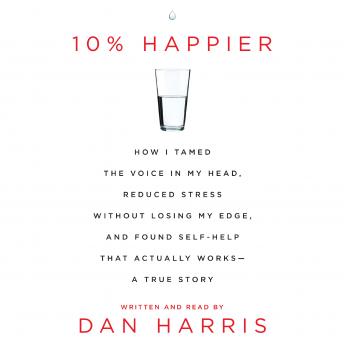 10% Happier: How I Tamed the Voice in My Head, Reduced Stress Without Losing My Edge, and Found a Self-Help That Actually Works--A True Story

Nightline anchor Dan Harris embarks on an unexpected, hilarious, and deeply skeptical odyssey through the strange worlds of spirituality and self-help, and discovers a way to get happier that is truly achievable.

After having a nationally televised panic attack on Good Morning America, Dan Harris knew he had to make some changes. A lifelong nonbeliever, he found himself on a bizarre adventure, involving a disgraced pastor, a mysterious self-help guru, and a gaggle of brain scientists. Eventually, Harris realized that the source of his problems was the very thing he always thought was his greatest asset: the incessant, insatiable voice in his head, which had both propelled him through the ranks of a hyper-competitive business and also led him to make the profoundly stupid decisions that provoked his on-air freak-out.

We all have a voice in our head. It’s what has us losing our temper unnecessarily, checking our email compulsively, eating when we’re not hungry, and fixating on the past and the future at the expense of the present. Most of us would assume we’re stuck with this voice – that there’s nothing we can do to rein it in – but Harris stumbled upon an effective way to do just that. It’s a far cry from the miracle cures peddled by the self-help swamis he met; instead, it’s something he always assumed to be either impossible or useless: meditation. After learning about research that suggests meditation can do everything from lower your blood pressure to essentially rewire your brain, Harris took a deep dive into the underreported world of CEOs, scientists, and even marines who are now using it for increased calm, focus, and happiness.

10% Happier takes readers on a ride from the outer reaches of neuroscience to the inner sanctum of network news to the bizarre fringes of America’s spiritual scene, and leaves them with a takeaway that could actually change their lives.

Gives amazing and simplified ways to change your life. I have read other self-help books without completely understanding those other authors, and ultimately, those books did not help me. Ironically, Dan Harris read the same books and had similar results. However, Dan Harris did more research and gives insight into those other books that breaks down what to learn from each of those authors. Dan Harris holds nothing back on his opinions of others and his complete honesty is both helpful and humorous.

I love Dan, this book, his journey, everything! So glad I read this one!!

The book kept my attention and gave me a look at different self help options other than reading.

Loved this book. It was not what I was expecting, but so eloquently written with such humor, authenticity and passion. I love that Dan narrated it himself. It didn't feel like a self help book, it was just a guy, telling a very good story. And if you haven't tried the app of the same name, you are truly missing out!!

I didn't love the voice at first but it quickly grew on me. I got a LOT from this book and even want to reread it so I can make sure more of it sticks. it's convinced me to look more into meditation which is something I thought I'd never do.

Glad he went through the journey and shared the story. Good story overall but not impressed by his way of telling. The core of the book can be literally less than 20% of the whole story, some of the details are not relevant or supporting the key message yet he likes to put all things and names just as he recalls. Again if you really cut, it could make an hour interview not a full book so...

Not what I expected. Also the reporter style of narrating made it hard for me to actually listen to the book because all I could focus on was the rise and fall and pause if his voice.

Entertaining. Sometimes I zone out with audiobooks but this one kept me actively listening and laughing.

I am, like Harris, a very down-to-earth, action-oriented person. For me, this was perfect and extremely realistic.

This book housed such an engaging story about the author's path toward becoming a more mindful person. I've read plenty of books about meditation and mindfulness but none have actually inspired me to take action the way this no nonsense book has. I absolutely loved Harris' unabashed honesty and self-effacing authenticity. This is such a distinctive perspective on mindfulness yet one I think most people will be able to relate to. I hope Harris keeps writing!

Excellent read. Funny, inspiring and real. Dan Harris found a way to keep me listening despite my skeptical nature.

Great intro to the world of meditation. The vocabulary is very good and it is almost as if you are reading a thesarus at times. I would prefer it to be a bit less on high vocabulary and more on meditation content.

Good through most of book. The author lost me by the end.