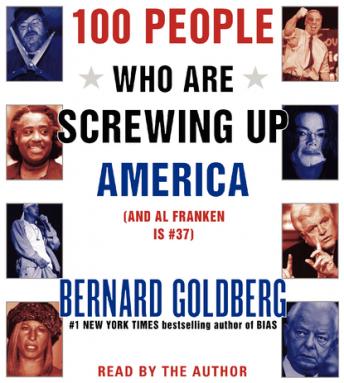 100 People Who Are Screwing Up America: And Al Franken is #37

Bernard Goldberg takes dead aim at the America Bashers (the cultural elites who look down their snobby noses at 'ordinary' Americans and detest so much of what this country is about)...the Hollywood Blowhards (incredibly ditzy celebrities who think they're smart just because they're famous)...the TV Schlockmeisters (including the one whose show has been compared to a churning mass of maggots devouring rotten meat)...the Intellectual Thugs (big-wigs at some of our best colleges, whose views run the gamut from left-wing to far left-wing)...and many more.Goldberg names names, profiling the villains in his rogues' gallery, one by one, from 100 down to 1 -- and yes, you-know-who is #37. But Goldberg doesn't just round up the usual suspects we have come to know and detest. He also exposes some of the people who operate away from the limelight but still manage to pull a lot of strings and do all sorts of harm to our culture.100 People Who Are Screwing Up America is about a country where as long as anything goes, sooner or later everything will go.

100 People Who Are Screwing Up America: And Al Franken is #37

This title is due for release on July 31, 2005
We'll send you an email as soon as it is available!