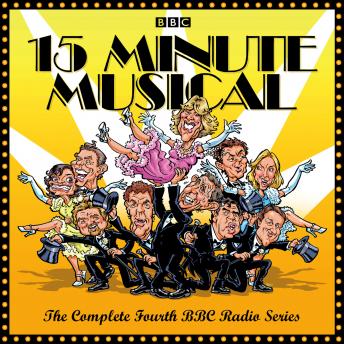 The complete fourth series of brief musical comedies – as heard on BBC Radio 4. These musical comedies contain some of the most foot-tapping satire you’ll ever hear... * ‘Westminster Side Story’ – Gordon Brown and David Cameron are two gang leaders with nothing to fight about. * ‘Life on Noel’ – Noel Edmonds wakes up in 2007 and is desperate to return to 1973 in this 70s glam-rock musical. * ‘How Do You Stop a Woman Like Camilla?’ – Camilla Parker Bowles leaves the convent to help look after Charles Von Windsor’s huge family of two boys. * ‘When You Wish upon a Car’ – a tornado dumps Jeremy Clarkson under the rainbow in the car-free and pedestrian-friendly Land of Oz. * ‘The Princess and the Frog Chorus’ – Ringo Starr narrates a tabloid fairytale about Heather, a young princess, and Paul, a not-so-young mega-rich pop prince. * ‘Around the World in 15 Minutes’ – Tony Phileas Blair accepts a bet from Gordon Brown that he can’t solve the world’s problems in a quarter of an hour. The complete fourth BBC Radio 4 series by Dave Cohen, David Quantick and Richie Webb.