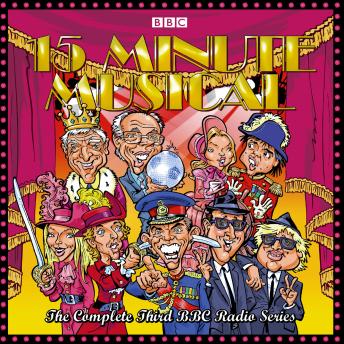 The complete third series of musical comedies – as heard on BBC Radio 4. These musical comedies contain some of the most foot-tapping satire you’ll ever hear... * ‘Manager Mia’ – We follow the escapades of England football manager Sven-Göran Eriksson on and off the pitch, with a tribute to ABBA. * ‘SS Metaphor’ – An unbreakable love affair set aboard an unsinkable ship, involving Kate Moss and Pete O’Doherty. * ‘Oh What a Lovely Blair’ – A patriotic First World War musical set in the trenches, with Field Marshal Corporal Lieutenant General Blair. * ‘The Court of King Michael of Parkinson’ – King Michael is looking for an heir to take over his chat-show throne. * ‘The Blue Brothers’ – We follow the quest of Dave Cameron and Boris ‘BJ’ Johnson to save the Conservative orphanage party. * ‘The Three Smugateers’ – 1652, France. Chris Martagnan wants to bring truth, justice and boredom to the world and joins the world famous Three Smugateers. All for smug and smug for all! The complete third BBC Radio 4 series by Dave Cohen, David Quantick and Richie Webb.