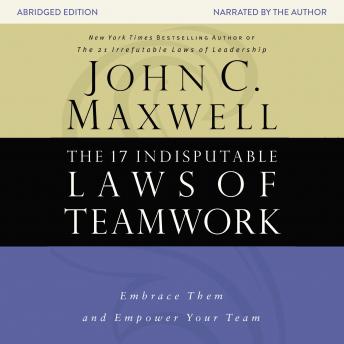 The 17 Indisputable Laws of Teamwork: Embrace Them and Empower Your Team

"There is no 'i' in "team.'" "No man is an island." "A chain is only as strong as its weakest link." You may roll your eyes at these age-old clichés, but you can't afford to breeze over their point. Individual all-stars can only take you so far. Ultimately, success--whether in business, family, church, athletic teams, or any other organization--is entirely dependent on teamwork. But how does one build that team?Leadership expert and New York Times bestselling author John C. Maxwell knows that building and maintaining a successful team is no simple task. Even people who have taken their teams to the highest level in their field have difficulty re-creating what accounted for their successes. So in The 17 Indisputable Laws of Teamwork, Maxwell shares the vital principles of team building that are necessary for success in any type of organization. In his practical, down-to-earth style, Dr. Maxwell shows how: The Law of High Morale inspired a 50-year-old man who couldn't even swim to train for the toughest triathlon in the world. The Law of the Big Picture prompted a former US president to travel across the country by bus, sleep in a basement, and do manual labor. Playing by The Law of the Scoreboard enabled one web-based company to keep growing and make money while thousands of other Internet businesses failed. Ignoring The Law of the Price Tag caused one of the world's largest retailers to close its doors after 128 years in business. And so much more!Building a successful team has plagued leaders since the beginning of time. Is the key a strong work ethic? Is it "chemistry"? The 17 Indisputable Laws of Teamwork will empower you--whether coach or player, teacher or student, CEO or non-profit volunteer--with the "how-tos" and attitudes for building a successful team.

17 Indisputable Laws of Teamwork: Embrace Them and Empower Your Team