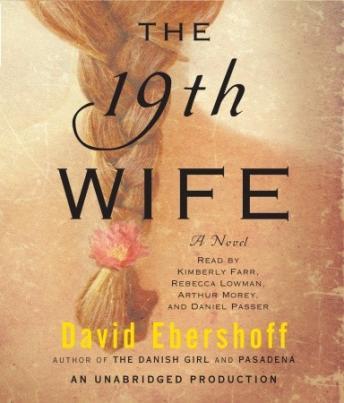 Faith, I tell them, is a mystery, elusive to many, and never easy to explain.

It is 1875, and Ann Eliza Young has recently separated from her powerful husband, Brigham Young, prophet and leader of the Mormon Church. Expelled and an outcast, Ann Eliza embarks on a crusade to end polygamy in the United States. A rich account of a family’s polygamous history is revealed, including how a young woman became a plural wife.

Soon after Ann Eliza’s story begins, a second exquisite narrative unfolds–a tale of murder involving a polygamist family in present-day Utah. Jordan Scott, a young man who was thrown out of his fundamentalist sect years earlier, must reenter the world that cast him aside in order to discover the truth behind his father’s death.

And as Ann Eliza’s narrative intertwines with that of Jordan’ s search, readers are pulled deeper into the mysteries of love and faith.

Praise for The 19th Wife

“This exquisite tour de force explores the dark roots of polygamy and its modern-day fruit in a renegade cult . . . Ebershoff brilliantly blends a haunting fictional narrative by Ann Eliza Young, the real-life 19th “rebel” wife of Mormon leader Brigham Young, with the equally compelling contemporary narrative of fictional Jordan Scott, a 20-year-old gay man. . . . With the topic of plural marriage and its shattering impact on women and powerless children in today's headlines, this novel is essential reading for anyone seeking understanding of the subject.”—Publishers Weekly (starred review)