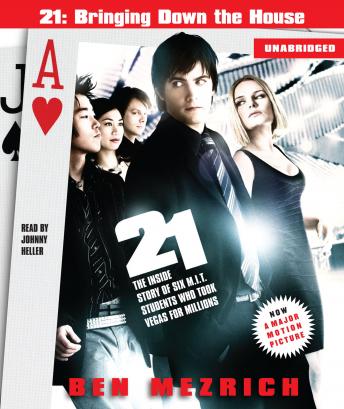 21: Bringing Down the House Movie Tie-In: The Inside Story of Six M.I.T. Students Who Took Vegas for Millions

The long-running New York Times bestseller that has become a cultural phenomenon, Bringing Down the House is an action-filled caper carried out by the unlikeliest of cons -- supersmart geeks. Gambling pervaded the M.I.T. campus, and genius kids with money and glittering futures were just as likely to be found in a Paradise Island casino as in the school library. A highly elite group of mathletes was recruited to join The Club, a small, secret blackjack organization dedicated to counting cards and beating the major casinos across the nation at their own game. As a successful ring of card savants, backed by a mysterious ringleader and shadowy investors, they infiltrated Vegas and won millions.

The Boston Herald acclaimed it as 'a suspenseful tale that portrays the players as Davids going up against Goliaths.' Filled with tense action, high stakes, and incredibly close calls, Bringing Down the House is a nail-biting chronicle of a real-life Ocean's Eleven. It's one story that Vegas does not want you to know.

This book is initially interesting and fast paced. The second half really drags and becomes a bit repetitive and slightly boring. Nothing heavy here, just a tale of gambling, Vegas and bright kids with a way to win (legally?). Fun, light read.

Great story, narrator did a good job however you can hear him breathe and background noise so the editing was poor. The story makes up for that.

The guy who is reading this needs to learn how to stop with the "wet mouth". It makes me gag when I listen to it.