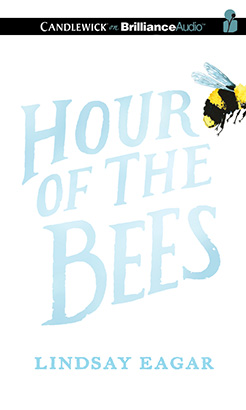 Hour of the Bees

While her friends are spending their summers having pool parties and sleepovers, twelve-year-old Carolina-Carol-is spending hers in the middle of the New Mexico desert, helping her parents move the grandfather she's never met off his dying sheep ranch and into a home for people with dementia.

At first Carol keeps her distance from prickly Grandpa Serge, whose eyes are impossibly old and who chastises "Caro-leeen-a" for spitting on her roots. But as the summer drags on and the heat bears down, she finds herself drawn to Serge, enchanted by his stories about an oasis in the desert with a green-glass lake and a tree that gave the villagers the gift of immortality-and the bees that kept the tree alive.

When Serge weaves details of his own life into his stories and tells her to keep an eye out for the bees he is certain will return to the ranch and end the century-long drought, she chalks it up to dementia. But as the thin line between magic and reality starts to blur, Carol must decide for herself what is possible-and what it means to be true to her roots.

Hour of the Bees