27: A History of the 27 Club Through the Lives of Brian Jones, Jimi Hendrix, Janis Joplin, Jim Morrison, Kurt Cobain, and Amy Winehouse 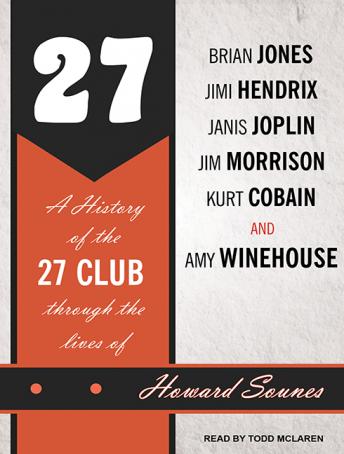 When singer Amy Winehouse was found dead at her London home in 2011, the press inducted her into what Kurt Cobain's mother named the 27 Club. 'Now he's gone and joined that stupid club,' she said in 1994, after being told that her son, the front man of Nirvana, had committed suicide. 'I told him not to.' Kurt's mom was referring to the extraordinary roll call of iconic stars who died at the same young age. The Big Six are Brian Jones of the Rolling Stones, Jimi Hendrix, Janis Joplin, Jim Morrison of the Doors, Kurt Cobain and, now, Amy Winehouse. All were talented. All were dissipated. All were 27.

Journalists write about 'the curse of the 27 Club' as if there is a supernatural reason for this series of deaths. Others invoke astrology, numerology, and conspiracy theories to explain what has become a modern mystery. In this haunting book, author Howard Sounes conducts the definitive forensic investigation into the lives and deaths of the six most iconic members of the Club, plus another forty-four music industry figures who died at 27, to discover what, apart from coincidence, this phenomenon signifies.

In a grimly fascinating journey through the dark side of the music business over six decades, Sounes uncovers a common story of excess, madness, and self-destruction. The fantasies, half-truths, and mythologies that have become associated with Jones, Hendrix, Joplin, Morrison, Cobain, and Winehouse are debunked. Instead a clear and compelling narrative emerges, one based on hard facts, that unites these lost souls in both life and death.

27: A History of the 27 Club Through the Lives of Brian Jones, Jimi Hendrix, Janis Joplin, Jim Morrison, Kurt Cobain, and Amy Winehouse