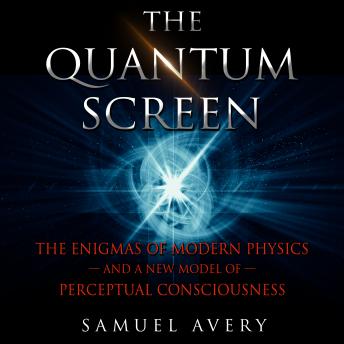 The Quantum Screen: The Enigmas of Modern Physics and a New Model of Perceptual Consciousness

"What is the connection between physics and consciousness? In this groundbreaking new book, Samuel Avery presents the quantum screen, a paradigm-shifting model of perceptual consciousness and of the world. This model looks to the enigmas of modern physics to demonstrate the primacy of consciousness--the essential oneness of spirit and matter.

Our intellectual culture is divided between two poles--science and religion. It's often assumed that these two disciplines--each individually essential and intriguing--cannot speak to one another. Physics cannot answer spiritual questions. Theories of consciousness have no place in the laboratory. In fact, the opposite is true.
While mental and physical experiences appear to be separate realities, Avery believes that a new understanding of dimensions will unite them. Dimensions as structures of perceptual consciousness will awaken a creative convergence of quantum mechanics, relativity theory, and ancient meditation traditions.

Scientifically rigorous and spiritually profound, Avery's model is far from a mere concept or belief. He offers both an explanation of the quantum screen, as well as an opportunity to experience it directly. He deftly weaves humanism into the fabric of hard science. The result is illuminating and potentially life changing, with significant implications for how we understand nature, ourselves, and each other."

Quantum Screen: The Enigmas of Modern Physics and a New Model of Perceptual Consciousness