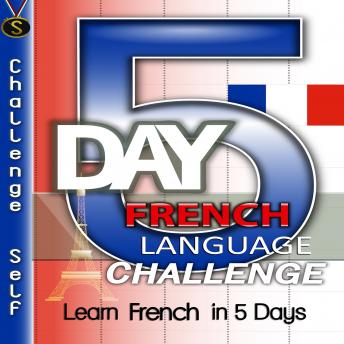 Written By: Challenge Self

Narrated By: Challenge Self

*You MUST download the accompanying reference material PDF in order to go through the audiobook.
Learn French with Your '5-Day French Language Challenge'
Why are you reading this? Because:
- You want to speak one of the dominant languages in North America.
- You want to know the language that has strongly influenced English.
- You want to charm those around you by learning the language of love.
- You want to grasp enough French to travel to French-speaking countries.
- You want to have the easiest and fastest way to study French for beginners.
French is not only a beautiful language but more popular than you may realize here in North American, plus it is spoken in over five continents. There is just a myriad of reasons why learning French is such a great idea.
Here in the United States, many people do already speak Spanish as a second language. However, French is quite another story; it can make you seem more appealing and stand out more in demand, opening up all sorts of opportunities—especially in the work force.
Career Enhancement – An employer is going to be more likely to hire someone who knows more than one language than one who only speaks English. It allows to communicate with important French-speaking only clients in a way that they can understand.
Education Opportunity – France is one of the most desirable country where you can study abroad. Imagine being able to go to Paris and understand what people are saying. You can travel to France and expand your knowledge.
Romance and Attraction – French is the language of love. Imagine wooing that special someone by speaking French to them and making them feel special. No matter what you say to someone, it always sounds more lovely in French.
If you want to start learning French, the '5-Day French Language Challenge' is your easy, no-hassle ticket to journeying into the French language that is going to really get you up to speed in no time.

This title is due for release on December 25, 2019
We'll send you an email as soon as it is available!