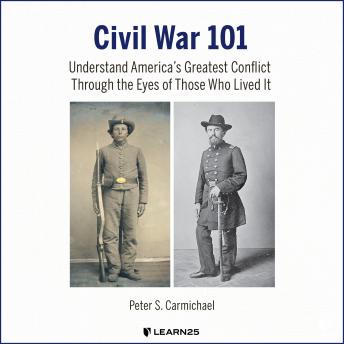 Civil War 101: Understand America's Greatest Conflict Through the Eyes of Those Who Lived It

Join one of the Civil War's greatest living historians in exploring this monumental event through the eyes of those who lived it.

Imagine yourself living amid the bloodiest conflict on American soil. An infantry soldier marching into the Gettysburg battlefield in the front lines. A Minnesotan mother whose son responds to Lincoln's call for volunteers. A slave working the fields of a Mississippi plantation when rumors of Emancipation arrive.

Drawing on the letters and records of individual soldiers, this compelling audio course invites you to explore the relationship between events on the battlefield and life on the home front. With more than 600,000 casualties, the Civil War cannot be understood by looking exclusively at famous figures like Abraham Lincoln, Robert E. Lee, and Ulysses S. Grant. As you'll see, ordinary people-volunteer soldiers, runaway slaves, civilians in both the North and South-shaped the course of history. Hearing their stories illuminates the causes, consequences, and course of the war.

Your guide is Peter S. Carmichael, Director of the Civil War Institute at Gettysburg College and author of The War for the Common Soldier (2018).

Throughout, you'll pay special attention to the men who served in the ranks on both sides. You'll conclude by looking at the diverse ways that Americans continue to find political relevance in their Civil War past.

Civil War 101: Understand America's Greatest Conflict Through the Eyes of Those Who Lived It