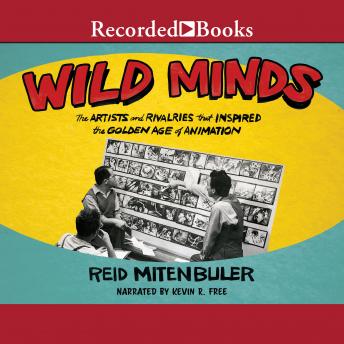 Wild Minds: The Artists and Rivalries That Inspired the Golden Age of Animation

The vivid and untold story of the golden age of classic animation and the often larger-than-life artists who created some of the most iconic cartoon characters of the twentieth century In 1911, the famed cartoonist Winsor McCay debuted an animated version of his popular newspaper strip, Little Nemo in Slumberland. Loosely inspired by Sigmund Freud's research on dreams, the film was one of the very first of its kind and astonishing for its time. McCay is largely forgotten today, but his work helped unleash the creative energy of animators like Otto Messmer, Max Fleischer, Walt Disney, and Chuck Jones. Their origin stories, rivalries, and sheer genius, as Reid Mitenbuler skillfully relates, were as colorful and subversive as their creations-from Felix the Cat to Bugs Bunny to feature films such as Fantasia-which became an integral part of American culture over the next five decades. Before television, animated cartoons were often "little hand grenades of social and political satire" aimed squarely at adults as preludes to movies. Early Betty Boop cartoons included nudity. Popeye stories slyly criticized the injustices of unchecked capitalism. Wile E. Coyote and the Road Runner were used to explore hidden depths of the American psyche. "During its first half-century," Mitenbuler writes, "animation was an important part of the culture wars about free speech, censorship, the appropriate boundaries of humor, and the influence of art and media on society." During WWII it also played a significant role in propaganda. The golden age of animation ended with the advent of television when cartoons were sanitized to appeal to a growing demographic of children and help advertisers sell sugary breakfast cereals. Alongside these stories, Mitenbuler incorporates the surprising contributions of Theodor Geisel (Dr. Seuss), voice artist Mel Blanc, composer Leopold Stokowski, and many others whose talents enriched the world of animation. Wild Minds is an ode to our lively past and to the creative energy that would inspire The Simpsons, South Park, and BoJack Horseman today.

Wild Minds: The Artists and Rivalries That Inspired the Golden Age of Animation