The 500 Hats of Bartholomew Cubbins: A Radio Adaptation from the Voice of Yogi Bear! 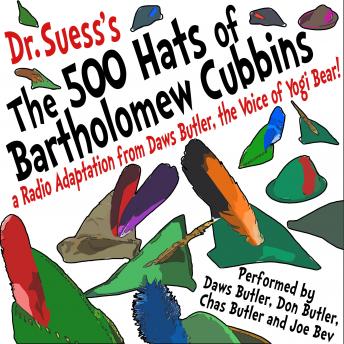 Don't miss this never before released recording of the Dr. Seuss story, dramatized for radio and directed by Daws Butler! Performed by Daws Butler and his sons, Chas and Don Butler, this radio play was produced by veteran award-winning producer Joe Bevilacqua, who talks with Daws' sons before the play.

Daws Butler was the master of voice. His was the voice behind most of the classic Hanna-Barbera characters: Yogi Bear, Huckleberry Hound, Quickdraw McGraw, Elroy Jetson, and a hundred others. He also originated the vocal character of Cap'n Crunch and other famous Jay Ward cartoon characters. His significant work with Stan Freberg in the 1950s on The Stan Freberg Show and multimillion-selling records such as "St. George and the Dragonet" are still held in reverence today. He also ran a voice acting workshop for many years. Among his many successful students are Nancy Cartwright, the voice of Bart Simpson, and Corey Burton, from Closet Cases of the Nerd Kind.

Theodor Seuss Geisel, also known as Dr. Seuss, is one of the most beloved children's book authors and illustrators of all time. From The Cat in the Hat to Oh, the Places You'll Go! his iconic characters, stories, and art style have been a lasting influence on generations of children and adults. Hundreds of millions of copies of his books have found their way into homes and hearts around the world. His long list of awards includes Caldecott Honors for McElligot's Pool, If I Ran the Zoo, and Bartholomew and the Oobleck; the Pulitzer Prize; and eight honorary doctorates. Works based on his original stories have won three Oscars, three Emmys, three Grammys, and a Peabody award.

500 Hats of Bartholomew Cubbins: A Radio Adaptation from the Voice of Yogi Bear!