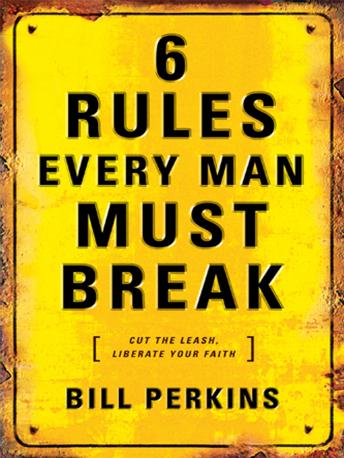 6 Rules Every Man Must Break: Cut the Leash, Liberate Your Faith

What if by breaking six specific rules, you could throw off the shackles of other peoples expectations and pursue a more authentic and liberating faith? Popular author and speaker Bill Perkins has a message for men who are willing to break the rules - the same ones that Jesus broke.

6 Rules Every Man Must Break challenges you to follow Jesus example Refuse to be handcuffed by rules that aren't based on Gods law. Drawing on personal stories and scriptural examples, Bill shows how defying these rules will help you to Break free from the hypocrisy of pretending to be someone you're not. Devote your spiritual energy to knowing God, not impressing others Set an example of honesty and integrity within the church. Become a leader equipped to fight life's most important battles.

Strengthen your connection with Christ by depending on him, not man-made rules, to transform you into the man he created you to be. So go ahead, break the rules and join the revolution of grace! You can develop a richer, closer walk with God, but according to Bill Perkins it all depends on your willingness to break a few rules. The six man-made mandates exposed in this book corrode your soul by placing demands on you that are impossible to fulfill. They also keep you from cultivating a vibrant friendship with God based on his grace, not your ability to keep rules perfectly on your own. You'll see from Scripture how Christ intends his disciples to live, free from the un-biblical expectations of the spiritual police the futility of trying to keep Gods law on your own the fear of expressing godly anger in a constructive way. The temptation to value the worlds opinion more than Gods Join Bill as he leads the rebellion against man-made rules and calls men to trust instead in the revolutionary power of God.

6 Rules Every Man Must Break: Cut the Leash, Liberate Your Faith