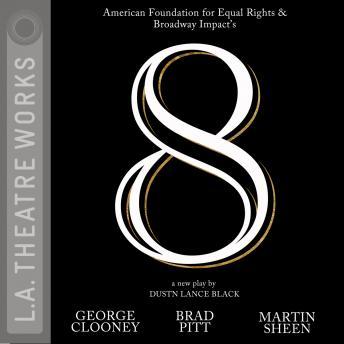 An unconstitutional proposition.
An unprecedented decision.
An all-star cast.

The play is a powerful account of the case filed by the American Federation for Equal Rights (AFER) in the U.S. District Court in 2010 to overturn Proposition 8, a constitutional amendment that eliminated the rights of same-sex couples to marry in the state of California. Framed around the trial's historic closing arguments in June 2010, 8 provides an intimate look what unfolded when the issue of same-sex marriage was on trial.

Directed by Rob Reiner. Recorded before a live audience at the Wilshire Ebell Theater, Los Angeles on March 3, 2012.