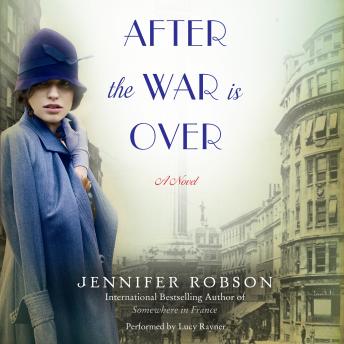 After the War is Over: A Novel

The International bestselling author of Somewhere in France returns with her sweeping second novel—a tale of class, love, and freedom—in which a young woman must find her place in a world forever changed.

After four years as a military nurse, Charlotte Brown is ready to leave behind the devastation of the Great War. The daughter of a vicar, she has always been determined to dedicate her life to helping others. Moving to busy Liverpool, she throws herself into her work with those most in need, only tearing herself away for the lively dinners she enjoys with the women at her boarding house.

Just as Charlotte begins to settle into her new circumstances, two messages arrive that will change her life. One, from a radical young newspaper editor, offers her a chance to speak out for those who cannot. The other pulls her back to her past, and to a man she has tried, and failed, to forget.

Edward Neville-Ashford, her former employer and the brother of Charlotte’s dearest friend, is now the new Earl of Cumberland—and a shadow of the man he once was. Yet under his battle wounds and haunted eyes Charlotte sees glimpses of the charming boy who long ago claimed her foolish heart. She wants to help him, but dare she risk her future for a man who can never be hers?

As Britain seethes with unrest and post-war euphoria flattens into bitter disappointment, Charlotte must confront long-held insecurities to find her true voice . . . and the courage to decide if the life she has created is the one she truly wants.

After the War is Over: A Novel