Do I Stand Alone?: Going to the Mat Against Political Pawns and Media Jackals 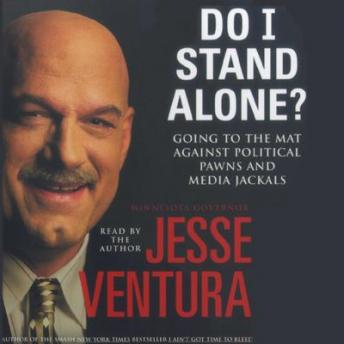 With jackhammer force and candor, Governor Ventura issues an urgent wake-up call to America -- a resounding indictment of our creeping national cynicism, and how our political system rewards mediocrity while turning a blind eye to accountability.
In Do I Stand Alone? Ventura decries the ease with which most Americans surrender their freedoms and apathetically accept a system of governance driven more by pork and patronage than by the best interests of the constituency. He also denounces an irresponsible media, taking them to task for too often confusing fame with notoriety, and for driving the news instead of simply reporting it. And he unabashedly speaks out on today's hot-button issues, including welfare, racism, abortion, campaign finance reform, and gay rights.
Giving us fascinating insights into the future of independent parties, Governor Ventura ushers us deep into the polished corridors of power, exposing the best -- and worst -- of our current crop of political personalities while laying out a workable strategy for bringing our political system -- and its politicians -- back to greatness.
In a forthright, razor-sharp, and entertaining critique, Governor Jesse Ventura has once again thrown down the gauntlet -- challenging today's politicians as well as a disenchanted public to transcend the tired rhetoric and defiantly reclaim the freedom and opportunity that is our American birthright.

Do I Stand Alone?: Going to the Mat Against Political Pawns and Media Jackals

This title is due for release on September 1, 2000
We'll send you an email as soon as it is available!