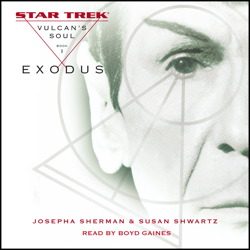 Following their bestsellers Vulcan's Forge and Vulcan's Heart, Josepha Sherman and Susan Shwartz embark on a new trilogy chronicling the latter-day adventures of one of Star Trek's most beloved characters, shedding new light on his world's shocking history.
One year after the end of the Dominion War, the Romulan Star Empire comes under attack by a mysterious and alarmingly powerful enemy calling itself the Watraii, a species with a long-standing vendetta against the Romulans. Yet though they remain tenuously allied, the Federation, the Romulans and the Klingons are unready to become embroiled in another sustained conflict, forcing Ambassador Spock, Admiral Uhura, Admiral Chekov, Captain Saavik, and some unexpected allies to defy their governments in order to meet the new threat head-on. But the first blood drawn may prove to be among the dearest of all.