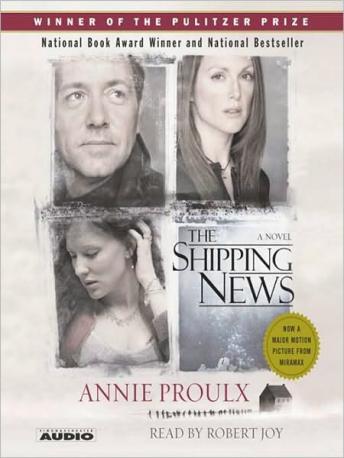 Winner of the Pulitzer Prize, Annie Proulx’s The Shipping News is a vigorous, darkly comic, and at times magical portrait of the contemporary North American family.

Quoyle, a third-rate newspaper hack, with a “head shaped like a crenshaw, no neck, reddish hair...features as bunched as kissed fingertips,” is wrenched violently out of his workaday life when his two-timing wife meets her just desserts. An aunt convinces Quoyle and his two emotionally disturbed daughters to return with her to the starkly beautiful coastal landscape of their ancestral home in Newfoundland. Here, on desolate Quoyle’s Point, in a house empty except for a few mementos of the family’s unsavory past, the battered members of three generations try to cobble up new lives.

Newfoundland is a country of coast and cove where the mercury rarely rises above seventy degrees, the local culinary delicacy is cod cheeks, and it’s easier to travel by boat and snowmobile than on anything with wheels. In this harsh place of cruel storms, a collapsing fishery, and chronic unemployment, the aunt sets up as a yacht upholsterer in nearby Killick-Claw, and Quoyle finds a job reporting the shipping news for the local weekly, the Gammy Bird (a paper that specializes in sexual-abuse stories and grisly photos of car accidents).

As the long winter closes its jaws of ice, each of the Quoyles confronts private demons, reels from catastrophe to minor triumph—in the company of the obsequious Mavis Bangs; Diddy Shovel the strongman; drowned Herald Prowse; cane-twirling Beety; Nutbeem, who steals foreign news from the radio; a demented cousin the aunt refuses to recognize; the much-zippered Alvin Yark; silent Wavey; and old Billy Pretty, with his bag of secrets. By the time of the spring storms Quoyle has learned how to gut cod, to escape from a pickle jar, and to tie a true lover’s knot.

A great novel, sad that it is abridged. Proulx earned widespread acclaim with this novel, and justly so. Quirky characters, a dead-end job, edge-of-the-world locale, and a house that has to be strapped down to a rock meld into a memorable, funny read.

I like these ordinary characters who rise above their situation and do admirable deeds. They remind me of characters by John Steinbeck and Neville Shute. This is an engaging and enjoyable read.

I have listened to at least 200 or more books and this has to be in my top three. I absolutely love this book and the writing style is like a breath of fresh air, because it is different and it is compelling. To write:'that she was the color of a brown feather on dark water', you gotta love it. I work for myself and sometimes am alone all day. So I love listen to books alot, this I have listened to 3x already. Narrator is excellent - his inflection when doing the voice of Alvin Yark is wonderful. Oh there aint no use, cause every nut and bolt is loose.

This title is due for release on December 1, 2001
We'll send you an email as soon as it is available!