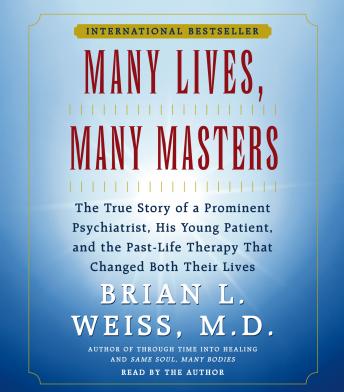 Many Lives, Many Masters

From author and psychotherapist Dr. Brian Weiss comes the classic New York Times bestseller on the true case of the past-life therapy that changed the lives of both the prominent psychiatrist and young patient involved—now featuring a new afterword by the author.

As a traditional psychotherapist, Dr. Brian Weiss was astonished and skeptical when one of his patients began recalling past-life traumas that seemed to hold the key to her recurring nightmares and anxiety attacks. His skepticism was eroded, however, when she began to channel messages from the “space between lives,” which contained remarkable revelations about Dr. Weiss’ family and his dead son. Using past-life therapy, he was able to cure the patient and embark on a new, more meaningful phase of his own career. With more than one million copies in print, Many Lives, Many Masters is one of the breakthrough texts in alternative psychotherapy and remains as provocative and timeless as it was when first published.

This book is about the patient Dr. Weiss treated that changed everything. It's the first patient he had who regressed to past lives. Fascinating information. I read the book years ago and was pleased to see it available in audio for a refresher... I'm never disappointed in the content of Dr. Weiss's books and Cd's.

The book is a good read for sure. However, I was not thrilled that it was missing so much of the book. That was kind of my purpose for doing this..,

This really is a great story. It's easy to listen to and enlightening at the same time. My only complaint is that it was just too short.

interesting overall but all the topics mentioned in the description of the book do not appear to be covered in this audio version such as the world war 2 experience.

I was almost in tears I was so impressed by this recording. I didn't even realise what I had rented but now I must have everything I can get my hands on by Brian Weiss. Unbelievable! This is a must rent. Don't delay, it will change your life.

Learning from past life’s trauma and understanding the plan of the soul. Soul=love

I think this book was very interesting. The narration is a little mundane but he’s also a hypnotherapist. I would have enjoyed more details about the past lives and the teachings. But overall it was worth it.

This book changed my life. It opened my mind and heart and there is no going back now. I am elated!

I liked the book, but it's very short. wished he could continue to work with her or others telling what they saw.

I love this book , I comprehend a lot of things in my life . Waooo

I was so looking forward to hear the entire book being read. Had I known that it was the abridged version...I may not have requested it. I'm now going to read the actual book.

Enjoyable and easy listening. I found the author and the subject credible.

I have had a depressive disorder and my friend has recommended Dr.Weiss's books for a while. Many Lives, Many Masters might be unbelievable for people that don't believe in reincarnation but for me as a Buddhist, this is an acceptable concept. I think what Dr.Weiss discovers is good for the psychology patients so that we know where our phobias are from as deep down all of us know that the phobias do not just pop out from the window. The main idea is that just let the past goes. Everything all ends. Stay in the present, in the moment which no one can hurt you any more. Be kind and forgive yourself. Everyone might not be able to connect to their masters but, well, at least it's good to know the message from other people's masters.

Truly enjoyed this book, a year later I constantly think about the possibilities of this and what it means towards my spirituality. Highly recommended.

Changed my outlook and perspective on life and death!!! A must read.

Easy to listen to. Calming, yet very informative.

INCREDIBLE!! A must listen for every person!! So much wisdom channeled through Dr Weiss' work. I am forever grateful to have been able to listen in on his sessions.

Absolutely beautiful. It's refreshing to hear a new take on life once in a while. The author is very brave for allowing others to hear his story so that they may have a chance to put their lives into perspective in a way that may be different but feels right. Thank you.

Interesting topic, narration was a little flat but it was a quick listen and something great to think about.

The only complaint is that theres a lot missing and should of read the full book.