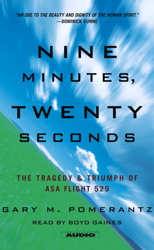 In August 1995, twenty-six passengers and a crew of three board a commuter plane in Atlanta headed for Gulfport, Mississippi. Shortly after takeoff they hear an explosion and some see a mangled engine lodged against the wing. From that moment, nine minutes and twenty seconds elapse until the crippled plane crashes in a west Georgia hayfield. Gary Pomerantz takes listeners deep into the hearts and minds of the people aboard, each of whom prepares in his or her own way for what may come.
Ultimately, nineteen people survive both the crash and its devastating aftermath, all of them profoundly affected by what they have seen and more important, what they have done to help themselves and others.
This psychologically illuminating real-life drama about ordinary people and how they behave in extraordinary circumstances is surprisingly optimistic. In telling the remarkable stories of these twenty-nine men and women, Gary Pomerantz has written one of the most compelling books in recent memory. Nine Minutes, Twenty Seconds speaks as powerfully about our capacity to care for others as it does about the strength of our will to live. This rich and rewarding audiobook will linger in your mind long after you finish listening.

This title is due for release on September 1, 2001
We'll send you an email as soon as it is available!