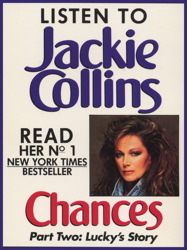 The book that introduced the world to Lucky Santangelo, offered in a special, two-part audio adaptation read by Jackie Collins—the unforgettable saga of the woman who conquered Las Vegas in Lucky and became Hollywood's top Lady Boss, the hot-blooded beauty who millions of readers know as a gambler, a lover, and a woman who's never afraid to take chances.

Gino Santangelo always knew he could count on his daughter. But when he fled the country to escape prosecution and entrusted her with his hard-won empire, Gino realized that Lucky Santangelo is no different than him—Lucky is a woman who could seize the reins of power with all the cunning, drive, and strength of a true Santangelo. Poised, sensuous, hungry for pleasure, Lucky is in love with power—and determined to fight for it.

From New York penthouses and the villas of Southern France to the casinos of Las Vegas and the bedrooms of Beverly Hills, here's the unforgettable story of a woman on top of a world of love, sex, and wealth—where power is the ultimate aphrodisiac.

This title is due for release on August 1, 1991
We'll send you an email as soon as it is available!