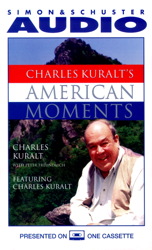 Charles Kuralt is a national treasure, a reporter and man of the world who was to many the real and true voice of America. For more than thirty-five years, he delighted us with his On the Road reports, as an anchor of CBS News Sunday Morning, and with bestselling books that include On the Road with Charles Kuralt and Charles Kuralt's America. As Time magazine wrote, he was 'the laureate of the common man.'
The project that Kuralt was working on when he died was An American Moment with Charles Kuralt, a series of brief television essays about the people, places, and ideas that define the national spirit: the man who handcrafts the President's shoes; the origin of buffalo wings; Paul Bunyan's hometown of Bemidji, Minnesota; the Pony Express Museum; Pike Place Market in Seattle; Ferris wheels; and more.
A collection of enchanting and sometimes touching stories that brings back Charles Kuralt's distinctive voice, Charles Kuralt's American Moments celebrates the quintessential American character and traditions that he so loved.