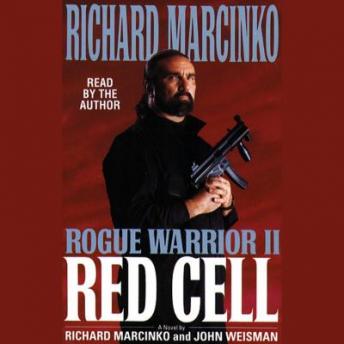 When Richard Marcinko wrote his bestselling autobiography, Rogue Warrior, he and co-writer John Weisman were bound by government restrictions and could only tell a fraction of his incredible story. Now the tales he could not tell, the secrets he could not reveal explode in ROGUE WARRIOR II: RED CELL -- a riveting ne novel with Marcinko himself as the hero.

He is the enemy's worst nightmare and lives by only one rule. . . win, by any means.

Freelance security consultant Dick Marcinko is playing terrorist at Tokyo's Narita Airport. Easily penetrating the facility's defenses, he engages in a deadly firefight with North Korean operatives -- and discovers that a group of traitorous Americans are smuggling nuclear materials to North Korea and Japan. With no where else to turn, the former Secretary of Defense recalls Marcinko to the Navy against his will to command Red Cell, a dirty-dozen Seal team Marcinko created. From infiltrating Washington's Navy Yard offices and secret nuclear weapons depot in California, to raiding a North Korean Navy base and a target far out in the Pacific, the Rogue Warrior and his marauding SEALs fight incredible odds and increasingly dangerous enemies. A relentlessly paced audio program that hurtles to its electifying climax, ROGUE WARRIOR II: RED CELL is as good as a thriller gets.