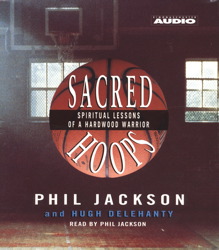 One of the most successful coaches in NBA history, Chicago Bulls head coach Phil Jackson provides an inside look at the higher wisdom of teamwork with Sacred Hoops -- Jackson's philosophy of mindful basketball and his lifelong quest to bring enlightenment to the competitive world of professional sports.

A new paradigm of leadership based on Eastern and Native American principles, Jackson's approach flies in the face of the egoistic, winner-take-all attitude that has changed the face of American sports. Rather than winning through intimidation, Jackson -- who describes himself as a Zen Christian -- stresses awareness, compassion and most of all selfless team play. Filled with stories about Michael Jordan, Scottie Pippen, Toni Kukoc and other members of the Bulls, Sacred Hoops reveals how Jackson directs his players to act with a clear mind; to respect the enemy and be aggressive without anger or violence; to live in the moment and stay calmly focused in the midst of chaos, so that the 'me' becomes the servant of the 'we.'

In Sacred Hoops, Jackson takes us inside the mind of the thinking man's coach as he builds one of the greatest teams of all time. Not just for sports fans, this inspiring memoir is for anyone interested in the potential of the human spirit.

This title is due for release on December 1, 1995
We'll send you an email as soon as it is available!