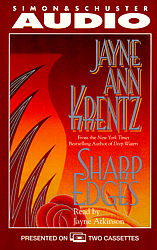 Love’s passionate snags get the smooth touch in this sparkling masterpiece from Jayne Ann Krentz!

She put her art on the line—and her heart in his hands...

Eugenia Swift is a young woman of singular sensibilities, and a connoisseur of beauty. As director of the Leabrook Glass Museum, she’s been asked to travel to Frog Cove Island—an artistic haven near Seattle—to catalog an important collection of art glass. But thanks to unsavory rumors surrounding the collector’s death, the museum insists that Eugenia take along Cyrus Chandler Colfax—a rough-hewn private investigator whose taste in glass runs to ice-cold bottles filled with beer.

When Colfax declares they must pose as a couple, Eugenia protests in a manner as loud as his Hawaiian shirts. But now their very lives depend on the most artful collaboration they can imagine. For a killer is lurking among Frog Cove’s chic galleries, and if anyone sees through their marital masquerade, their own secret agendas—as well as their plans for survival—may be smashed to smithereens!