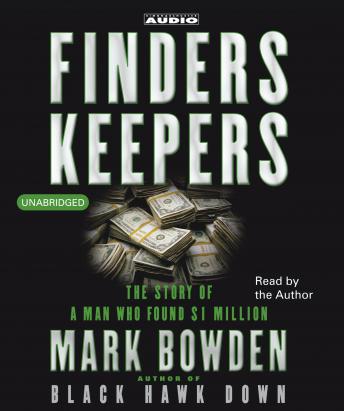 Finders Keepers: The Story of a Man who found $1 Million

Who hasn't dreamed of finding a million dollars?
Joey Coyle was down and out -- the affable, boyish South Philadelphian hadn't found dock work in months, he was living with his ailing mother, and he was fighting a drug habit and what seemed like a lifetime of bouncing into and out of bad luck. One morning, while cruising the streets just blocks from his home, fate took a turn worthy of Hollywood when he spotted a curious yellow tub he thought might make a good toolbox. It contained $1.2 million in unmarked bills -- casino money that had just fallen off the back of an armored truck.
Detective Pat Laurenzi, with the help of the FBI, was working around the clock to track it down, Joey Coyle, meanwhile, was off on a bungling, swashbuckling misadventure, sharing his windfall with everyone from his girlfriend to total strangers to the two neighborhood kids who drove him past it. To hide the money, Joey turned to the local mob bos -- a shadowy, fearsome man who may or may not have helped launder it. But as adrenaline-filled nights began taking their toll, Joey Coyle's dream-come-true evolved into a nightmare: Whom could he trust?
By one of our most evocative and versatile chroniclers of American life, Finders Keepers is not only a gripping true life thriller, it is the remarkable tale of an ordinary man faced with an extraordinary dilemma, and the fascinating reactions -- from complicity to concern to betrayal -- of the friends, family, and neighbors to whom he turns.

Finders Keepers is a tale of the greed we all hold secret in our hearts. It focuses on real-life protagonist Joey Coyle, who finds $1.2 million dropped from an armored car in the early 70's. The author takes us into Joey's blue collar South Philadelphia, where we come to know Joey as a man full of self-loathing, who's chronically unemployable, and frequently high on drugs and alcohol. The second half of the book is darker, even tragic, as we watch Joey and his cronies slowly but inexorably sabotage his dreams of "being a big coke dealer or opening a body shop" with the purloined money. The ending is unexpected, and disturbing because, after all of this, Joey is a pretty likable character as screw-ups go. Excellently read by the author, I highly recommend this piece of offbeat Americana.

A Philly crackhead finds a million. What to do? What to do? Mark Bowden once again writes a tight story. Good job.

Jumped around a lot and was kind of boring. I kept waiting for something great to happen.

This book was very dark to me. Because this is based on a true story I stayed with it until the end. It depressed me how this man's lifestyle was. Over all it was ok.

In enjoyed this fascinating tale. I was surprised to hear the author tell his story of marketing the story and helping to make it into a movie.

I've gotta agree with Gary from Stockton - this book was a SNOOZEROONIE! I think the only reason others gave it a good rating would be that they inserted themselves into Joey's situation and let their minds wander while the author went on and on and on and on.........geez - too much drug info, too much courtroom info (wayyyy too much) and then the ending drops off a cliff - "OK that's the end of my book"....

Good story. Had to sit back and laugh at some of the situations he got himself in. Amazing

I really enjoyed the book and the story, but the stupidity of Joey was amazing. This hit got an amazingly lucky break and screwed it all up. Quite a comedy of errors!

Good book. It was slow at some parts, but the narrator is very good to listen to.

I found this audiobook to be odd. It didn't really seem like a story but more like a timeline. It was read by the author himself and after listening I was completely unaware it was based on a true story that was later turned into a movie starring John Cusack.

If you've got nothing to do today, you could go outside and watch the grass grow or you could listen to this book. Sorry, but this was a real snoozer. Although the premise could have made an interesting book, there was so much mind-numbing minutiae that I eventually jumped to the next disc just to speed the book along. Too much detail about the money, the personalities and the trial. Boring with a capital B. Not what I hoped for at all. Sorry, Mr. Bowden.

This book on CD was good listen. It held my interest. I had actually heard about this on A.M Philadelphia years ago and Joey Coyle was being interviewed. I could not take my ear from the CD player.

The writing was easy to listen to while driving to/from work.