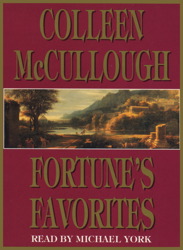 #3 of Masters of Rome

Return to Ancient Rome - where politics, ambition, and greed collide in the fortunes of two fiercely powerful men: Lucius Cornelius Sulla, the great general who returns from exile to be installed as dictator, and then stuns Rome with his startling self-imposed retirement; and Pompey, the young scion of an enormously powerful rural family, who determines to leapfrog over the traditional milestones to Roman political pre-eminence by any means necessary.

Passionate, ambitious, and larger than life, these men play out their fortunes against rebellious elements in Spain, dangerous rumblings in the East and the doomed slave revolt of the tragic figure Spartacus. But a greater threat to their place in history awaits - the fiery young warrior Julius Caesar, exploding now into manhood, his priest's robe shed in a most surprising manner. A newcomer to military glory and the Senate, he earns a formidable reputation as diplomat, lawyer and politician.

In fascinating and unrivaled grandeur, Fortune's Favorites sows the seeds of Caesar's terrible rivalry with Pompey, and sets into motion the events which will finally enable him to tower over history for all time.