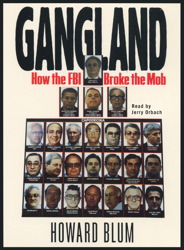 Gangland: How the FBI Broke the Mob

The team: A handpicked squad of FBI agents -- led by a war hero determined to get the job done. The target: John Gotti, the seemingly invincible head of the richest and most powerful crime of modern-day Untouchables, the FBI's C-16 Organized Crime squad, who finally ended the cocky crime lord's reign of terror.

Drawing on unprecedented access to FBI records and agents, bestselling author and prize-winning journalist Howard Blum tells the riveting and suspenseful story behind the headlines. Here is the deadly game of cat and mouse that pitted Gotti, his ruthless henchmen and his elusive law-enforcement mole against the Bureau.

It is a tale of courage, murder and betrayal. From Mafia backrooms to FBI squad rooms, from the high-tech electronic invasion of Gotti's headquarters to the desperate effort to expose the mole, Gangland is more shocking than fiction -- an instant Mafia classic.