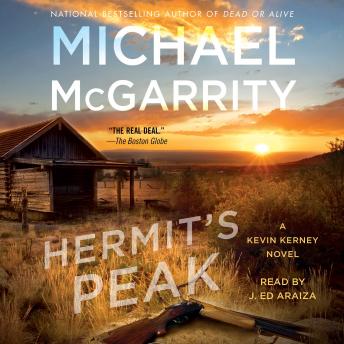 Hermit’s Peak is a seminal novel in the crime fiction series that places New Mexico lawman Kevin Kerney in the pantheon with Tony Hillerman’s heroes—while carving out territory that is distinctly his own across the American Southwest.

When Kevin Kerney, deputy chief of the New Mexico State Police, inherits an unexpected windfall of 6,400 acres of high-county land, the last thing he wants to think about is work. But while visiting his new property, he comes across an ailing stray dog that leads him to the butchered bones of a murder victim near the rugged mountain of Hermit's Peak.

After assigning the case to his subordinates, Kerney returns to Santa Fe to spend time with a woman he cares about, Sara Brannon, a career army officer who is visiting him on holiday. But his time with Sara must wait, as he is called back to Hermit's Peak when another body is found at a remote cabin. Now, Kerney must unearth the shattering truth about his new land and follow a twisting trail of blood through the majestic landscape of the American Southwest.