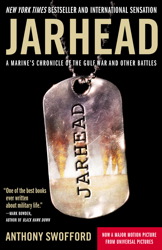 In his New York Times bestselling chronicle of military life, Anthony Swofford weaves his experiences in war with vivid accounts of boot camp, reflections on the mythos of the marines, and remembrances of battles with lovers and family.

When the U.S. Marines -- or 'jarheads' -- were sent to Saudi Arabia in 1990 for the first Gulf War, Anthony Swofford was there. He lived in sand for six months; he was punished by boredom and fear; he considered suicide, pulled a gun on a fellow marine, and was targeted by both enemy and friendly fire. As engagement with the Iraqis drew near, he was forced to consider what it means to be an American, a soldier, a son of a soldier, and a man.

After listening to about 6 of the 8 disks, I realize that I don't like this guy very much. If I follow the timeline correctly, he attempted both suicide AND murder before he even saw a combatant, and then blames his problems on the Marine Corps and war. However, he does have a very good style of writing, and I hope that he gets over himself, gets some medication, and gets moving on a next book.

I had seen the movie, so I was interested in the book. I was very dissapointed with the narrator. He was horrible. There was no emotion in his reading. It almost sounded like droaning. Which is sad because I really enjoyed the movie.

It's just OK for a memoir but read awfully in a completely monotonous tone.

The author writes well, his discriptive techinique is really amazing but why is it that they have the author reading this story? He has no talent for the read. His style is monotone, there is absolutely no inflection in his voice. It was very annoying, and I found my mind wandering frequently. Reading is a talent not every author has. Did not finish it. Should be read, not listened to.

Thank you, Anthony Swafford, for sharing your thoughts and experiences. I am the richer for it.

This book was terrible, the author must be a disgrace to the marine corps and I am truly sorry he was ever allowed to serve this country. Couldnt even finish the second disk.

Unfortunately this book is repetitive and introduces us to a self UNaware soldier. His reading voice is irritating as well. I hoped to get some insight into "a marine" and I guess I did if Marine's are generally one dimensional and immature. I somehow doubt that that is generally the case so I am dissapointed. I must admit that I did not listen to the last half and it might have improved.

For the first time, I did not even finish the book. Between the language and the author's self-deification, i simply could not listen. If you are thinking of either listening to, or reading, this book - reconsider.

Caustic and blunt, Anthony Swofford gives a personal, extremely graphic and honest portrayal of the Marine Corps and the First Gulf War as he experienced it. As the author admits, it is difficult to distinguish between perception and literal reality, but Swofford's story is heartbreaking and compelling regardless. Read by the author himself, which I felt lent power to the narrative. Well done.

This book is a fascinating reflection of one man's experience with the Marines & war. He doesn't actually discuss his war experience, but rather waiting for the war to start, and afterward. It is profane, but compelling. I recommend it to others who want to know what it's like to be a jarhead.

I read this book before i got the chance to watch the movie and I'm glad I did. The narrator was the actual author, which lent the air of sitting down with somebody, and them telling you all there was to know. I recommend this book to all my friends who are willing to listen to me about it. Looking forward to reading it again soon.

I chose to read/listen to "Jarhead" because I have a dear friend who served in Operation Desert Shield/Storm and I wanted to hear what it was like, especially the parts that Bobby is reluctant to talk about. The story itself was engaging, altho' I think Mr. Swofford should've chosen someone (ANYONE!!) else to read his book for him, because the sound and cadence of his voice had grown so monotonous by the end of the book, always falling at the end of a sentence, that I was just glad it was over. But if you want to feel the heat, grit, and desolation of the desert and taste the burning oil wells in 1990-91, this would be the book that can do it for you.

Weak. Not enough story to carry a book and I'm an ex-Marine and was doubly interested.

The book content was good. My son, a marine, says it accurately depicts bootcamp and the camaraderie in the Corp. Not sure about combat though. I wish the author had not narrated it. He sounds like a 2nd grader reading in front of an audience for the first time; monotone, no emotion whatsoever.

Total crap..This is a story of a suicidal Marine who blames his outlook on life on what he calls his poor decision of joining the Marine Corps. It is too bad that Marines like Mr. Swafford slip through the cracks in boot camp and earn the title Marine, let alone be given the oppurtunity to slander the Corps in such a vituperative manner. I would skip on this one..

Great description of life in the military. Swofford does a fantastic job describing how he is able to both love and hate the Marine Corps. Highly recommended for the book's compassion as well as its crudeness.

Mr. Swofford does not accurately portray marines or Marines in combat. By his own account he never experienced real combat. He had been shelled twice, but no firefights. Hardly the battle hardened Marine he tries to portray himself as. As a former Marine Mr. Swofford is what I would call a [email protected]#! bird! If you want to read about Marines, and real combat for that matter there are far better books out there. Semper Fi!

This title is due for release on November 11, 2005
We'll send you an email as soon as it is available!