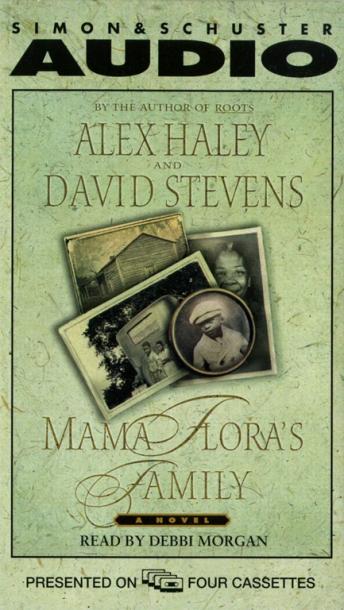 In the tradition of Roots and Queen, Mama Flora's Family is a sweeping epic of contemporary American history, culled from the unpublished works of award-winning writer Alex Haley. It is the poignant story of three generations of an African-American family who start out as destitute sharecroppers in Tennessee.

Mama Flora is the heart and strength of the family, shepherding her children through hard times after the murder of her husband by white land holders. She has passionate ambitions for her son Willie, but he dashes her dreams by abandoning his church-going roots and moving to Chicago. After fighting in the Second World War, he marries his childhood sweetheart and struggles to build a new urban life for his family.

Flora's dreams are realized by Ruthana, her sister's child, whom Mama Flora adopts. Ruthana graduates from college, and as a social worker in Harlem, counsels underprivileged women. Through her love for the radical poet Ben, Ruthana begins to understand her heritage, and after a sojourn in Africa comes to a redemptive understanding of herself.

In Chicago, Willie's twin son and daughter embrace Muslim militancy and Black Power, and eventually, drugs on their rocky road through the 1960s. Mama Flora struggles to maintain her family, but she also is caught up in the turbulent times.

Mama Flora's Family is an American tale as dramatic and touching as anything Alex Haley ever wrote.

This title is due for release on October 1, 1998
We'll send you an email as soon as it is available!