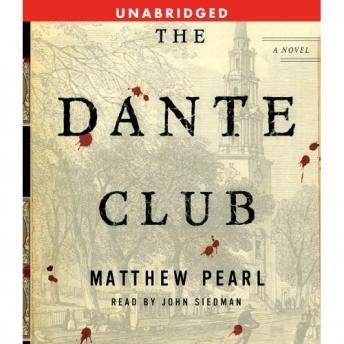 In 1865 Boston, the members of the Dante Club -- poets and Harvard professors Henry Wadsworth Longfellow, Dr. Oliver Wendell Holmes, and James Russell Lowell, along with publisher J.T. Fields -- are finishing America's first translation of The Divine Comedy and preparing to unveil Dante's remarkable visions to the New World. The powerful Boston Brahmins at Harvard College are fighting to keep Dante in obscurity, believing that the infiltration of foreign superstitions onto American bookshelves will prove as corrupting as the immigrants living in Boston Harbor.

As they struggle to keep their sacred literary cause alive, the plans of the Dante Club are put in further jeopardy when a serial killer unleashes his terror on the city. Only the scholars realize that the gruesome murders are modeled on the descriptions from Dante's Inferno and its account of Hell's torturous punishments. With the lives of the Boston elite and Dante's literary future in America at stake, the Dante Club must find the killer before the authorities discover their secret.

The Dante Club is a magnificent blend of fact and fiction, a brilliantly realized paean to Dante, his mythic genius, and his continued grip on our imaginations.

This is a great book! Well written, an interesting story, and an exciting ending. It takes patience at times because it's a scholarly book, but it's well worth the effort.

This book caught my attention as I fondly remember helping my college roommate memorize Dante's Inferno for finals. This book moves a little slowly for my taste. Not really a book to listen to while exercising! The murders are not that believable, but in all I enjoyed the read.

This was a really good book. Some of the language was sometimes too formal to really get into, but, overall, the book was exciting and a great mystery.

I loved the use of real people from history and the way historical elements were woven into this tale. It was fast-paced, well written, full of obscure factoids and just plain fun.

This story may be slightly over written for me. I tend to like easy reads and this story seems complicated like a text book that is trying to over do verses stating items or explanations in the simpler terms. Cindy

Excellent choice for a little cross country driving. Perhaps Matthew Pearl's writing is not on a par with that of Longfellow, Holmes, Lowell and Dante. Perhaps the premise is a bit far-fetched. So what? The story was engaging, the reading was pleasant and it made an otherwise boring drive quite enjoyable. What's not to like?

What a drag of a book. I was bored just listening. If the traffic wasn't so bad, i never would have finished it. On par with a B sci-fi movie!!

I feel that this book would only be slightly amusing to those who already have a solid grasp of the authors featured in this book: Longfellow, Holmes, and Lowell. The plot itself is insipid and unbelievable. For those with no interest in classic American literature, there would be no redeeming value.

I love the premise, the history, the location, the characters, everything! Sometimes the flowery descriptions made it difficult to follow and it is quite graphically gory at times, but we enjoyed it.

Very interesting to be a part of history. I felt as if I were there with historical Greats. Well written, easy listening, plausible content.